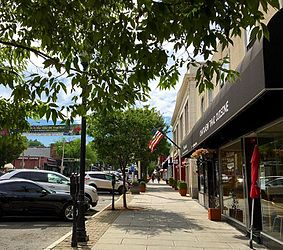 Englewood Township, the city’s predecessor, is believed to have been named in 1859 for the Engle family. The community had been called the “English Neighborhood”, as the first primarily English-speaking settlement on the New Jersey side of the Hudson River after New Netherland was annexed by England in 1664, though other sources mention the Engle family and the heavily forested areas of the community as the derivation of the name. Other sources indicate that the name is derived from “wood ingle”, meaning “woody nook”, or that the name was coined anew.

Numerous other settlements in the United States were named for Englewood as a settlement in North America expanded westward. J. Wyman Jones is credited with convincing residents to choose Englewood for the city’s name when it was incorporated over such alternatives as “Brayton” and “Paliscena”.

Complete the form below to learn more about Approved Funding, including our exclusive benefits for Friends of Englewood.