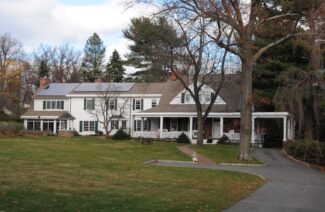 The Borough of Haworth is located in the northeastern corner of the state of New Jersey, and is bordered by the Boroughs of Closter, Demarest, Dumont, and Oradell, as well as the Oradell Reservoir. The municipal building is located at 300 Haworth Avenue and is home to the majority of the borough offices, as well as the Police Department. The Municipal Library is located directly behind Borough Hall, on Stevens Place.
Haworth Present Day
Haworth has the best of two worlds. It’s a quiet town, full of small-town atmosphere and tree-lined beauty, which belies the fact that it’s close enough to New York City to be a suburb. The town boasts an excellent local school, Haworth Public School, with grades kindergarten through 8th. For high school, students attend the equally top-notch Northern Valley Regional High School at Demarest, a National Blue Ribbon School of Excellence. Haworth’s downtown area is small, but storefronts still offer everything from hardware to haircuts. Haworth has two banks, four houses of worship, and what may be the friendliest post office in Bergen County.

The townspeople of Haworth have long been dedicated to community service. Our numerous volunteers are the town’s lifeblood. Whether it’s the Fire and Ambulance Squads, the Mayor and Council, or other departments, commissions, and committees too numerous to mention, Haworth is rightfully proud of its tradition of volunteerism and community spirit.
was incorporated as a borough on February 24, 1904, but the name “Haworth” goes back to 1872, when the railroad came to town. A New York railroad financier and author, John S. Sauzade, named this new station stop “Haworth” in tribute to the English hometown of the Bronte sisters, whose novels he admired.

While the railroad brought city residents looking for fresh air and open space, they weren’t the first to discover this corner of the Northern Valley. The half-dozen Dutch colonial stone farmhouses that still dot the town reflect the early farmers who settled here in the early 19th century. Haworth’s distinctive one-lane railroad bridge harkens back to a time when livestock, not cars, needed to cross the tracks.

Complete the form below to learn more about Approved Funding, including our exclusive benefits for Friends of Haworth.