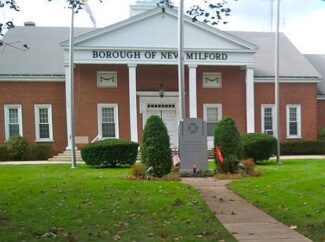 Included as part of Hudson County when it was created in 1840, the Borough of North Arlington rejoined Bergen in 1852. It encompasses approximately 2.6 square miles of the county¼s most southwesterly reach, with the Passaic River forming its western border with Essex County. In the 1750¼s, it was the site of the first working steam engine in America, used to pump water from the copper mine located there. Bergen County, New Jersey, was established in December 1682 (formed 7 Mar 1683), when the Assembly of East Jersey divided the Province into four original counties: Bergen, Essex, Middlesex, and Monmouth. It originally included the area that is today Hudson County, and part of the area that is today Passaic County. On October 31, 1693 Bergen County was divided into Bergen and Hackensack Townships. In 1709 (January 21, 1710) New Barbadoes township was transferred from Essex County to Bergen, and became its county seat. On February 7, 1837 part of Bergen County’s area was transferred to form Passaic County.

When the first Europeans arrived in New Jersey, they found the “Delaware People”, also known as the Leni-Lenape Indians. The Lenape are believed to have descended from one group of the Paleo-Indians who came across Siberia to the Seward Peninsula in Alaska about 30,000 years ago. Their name, Leni-Lenape, has a variety of translations which include “original people”, “real people” or “common people”. The early Lenape were a loose confederation of independent communities living mainly in the Delaware River Valley. North Arlington during the seventeenth and early eighteenth century was nothing more than a route Dutch travellers took to get from one place to the other. There were many Dutch settlers all across what is now New Jersey and New York. The area was first settled by the Dutch as part of New Amsterdam. After the English takeover in the early 1700′s, the American Revolution took place in the latter part of that century. Italian, Polish, and Irish Immigrants were subsequently drawn to the area throughout it’s later history to create a strong, dynamic and ethnically diverse place to live and work. Today the populace of North Arlington is representitive of nationalities and backgrounds from all over the world which makes the borough the All-American community it is today.

The copper mine played an important role in the history of the area that was to become North Arlington. An old servant, who was plowing not far from the first homestead, which is still standing in a modernized condition, turned up a heavy green stone, and, wondering at its oddity, took it to his master. Schuyler sent it to New York to be analyzed, and it was found to contain a large percentage of copper. This find opened up a great source of wealth to the family. Like the good fairy in the tale, Schuyler told his servant to wish for three things which were possible, and he would procure them for him. The poor old servant asked, first, that he might always live with his master; secondly, that he might have all the tobacco he could smoke; and thirdly, that he might have a gaudy banyan or dressing-gown like his master¼s. „Oh, ask for something of value,¾ Schuyler said to him, so the story goes; and the black man, after hesitating a few minutes, replied, „Well, give me a little more tobacco.¾ Located under a residential area of North Arlington. Claimed to be the oldest mine in the USA, opened in 1715 (about 1719). Ore was packed in barrels and shipped to England for smelting due to restrictions on smelting in the colonies. Had the first steam engine, imported from England, used to pump a mine in North America. Reopened 1859 and ultimately closed 1865. Ore was in mineralized, unaltered, gray arkosic sandstone in red sandstone in the proximity of trap dikes (Palisades diabase). Ore contained 4.4 oz. silver per ton plus would yield a gold bead. Workings featured the Victoria shaft at 347 feet deep. Also had 2 inclines (220 feet & 80 feet).

March 12th, 1755 – The first reported use of the steam engine was made — in North Arlington, NJ. In 1748 John Schuyler’s copper mine near Passaic, New Jersey, was shut down by flooding. So Schuyler paid the English engine-maker Jonathan Hornblower 1000 pounds to ship him a “fire engine” and a crew of mechanics to set it up. The engine arrived five years later, in 1753, along with Hornblower’s son, Josiah, and his crew. When Josiah got the machine up and running two years after that, Schuyler hired him to run the engine and the mine as well. The engine did well enough for five years. Then it was badly damaged in a fire. Josiah got it running again, but only ’til another fire ruined it in 1768. This time it stayed ruined through the American Revolution. An aging Josiah Hornblower made another repair in 1793, and this time the old engine kept pumping well into the 19th century.

The Birth of North Arlington

On March 9, 1896, application was made to the court for formation of yet another borough; this one, to be known as North Arlington, taking in the southern portion of Union Township. On Monday, March 26, 1896, borough advocates won the election in North Arlington with 46 votes in favor and none opposed. The new borough adjoined the northern limits of Kearney Township, the Belleville Turnpike and Saw Mill Creek forming the boundary between Hudson and Bergen Counties. The new borough contained about 400 inhabitants within about two square miles of territory. Politically, the population was about evenly divided but the first election of borough officials was to be a nonpartisan affair.

North Arlington is a crossroads, with Hudson County on one side and Essex County on the other. It is a residential area with a small town atmosphere and big city neighbors. Bus service to Hackensack and New York City and close proximity to The Meadowlands Sports Complex make North Arlington an excellent home for commuters. There are mostly one-family homes with some two family homes and three garden apartment complexes. Children’s and adults are kept busy throughout the year with sports programs, holiday celebrations, senior citizens programs and small parks, including one with special equipment for the handicapped. There is local shopping on Ridge Road and the Secaucus outlets are approximately 15 minutes away.

Complete the form below to learn more about Approved Funding, including our exclusive benefits for Friends of North Arlington.