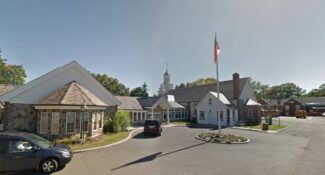 Oakland was incorporated as a borough by an act of the New Jersey Legislature on April 8, 1902, from portions of Franklin Township (now Wyckoff). The name comes from the white oak trees in the area.

The Van Allen House was built in 1748 and was a stop for George Washington and his troops in 1777.

From the 1940s through the end of the 1960s a summer bungalow colony was developed in a valley in West Oakland on the Ramapo River. This was a refuge for a close-knit group of several score families from the summer heat of New York City and urban New Jersey. During the summer months, the New York, Susquehanna and Western Railroad provided service at a West Oakland passenger station. This colony was located on the road between Oakland and Pompton Lakes, near a training camp for boxers. In the early morning, a resident could see Joe Louis or Sugar Ray Robinson, among others, running past the summer homes.[citation needed]

One section of streets in the town are named after Native American tribes and Native American first names. Now considered politically incorrect, the borough had a wooden sign posted downtown that read “Once there was [sic] Indians all over this place” which had been donated by a resident who insisted on the wording of the sign as having been a quotation from an author.

Complete the form below to learn more about Approved Funding, including our exclusive benefits for Friends of Oakland.