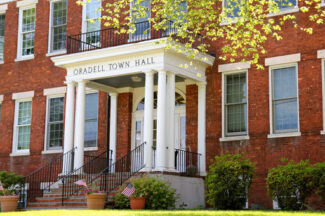 Oradell is a borough in Bergen County, New Jersey, United States. At the 2010 United States Census, the borough’s population was 7,978, reflecting a decline of 69 (-0.9%) from the 8,047 counted in the 2000 Census, which had in turn increased by 23 (+0.3%) from the 8,024 counted in the 1990 Census. The borough includes a dam on the Hackensack River that forms the Oradell Reservoir. Oradell is a suburb of New York City, located approximately 15 miles (24 km) northwest of Midtown Manhattan.

Oradell was originally formed on March 8, 1894, as the borough of Delford, from portions of Harrington Township, Midland Township (now Rochelle Park), and Palisades Township. The borough was formed during the “Boroughitis” phenomenon then sweeping through Bergen County, in which 26 boroughs were formed in the county in 1894 alone. The name “Delford” was a portmanteau created from the names of two communities within the new borough: Oradell and New Milford. The Hotel Delford had been constructed in 1870 after the construction of the first railroad to reach the area. On November 12, 1920, the borough’s name was officially changed to “Oradell”, based on the results of a referendum held ten days earlier. Oradell derives its name from “ora” (Latin for “edge”) and “dell”.

Complete the form below to learn more about Approved Funding, including our exclusive benefits for Friends of Oradell.