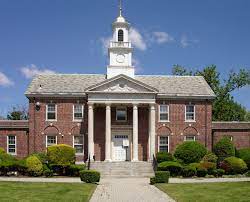 Teaneck was created on February 19, 1895, by an act of the New Jersey Legislature from portions of Englewood Township and Ridgefield Township, both of which are now defunct (despite existing municipalities with similar names), along with portions of Bogota and Leonia. Independence followed the result of a referendum held on January 14, 1895, in which voters favored incorporation by a 46–7 margin. To address the concerns of Englewood Township’s leaders, the new municipality was formed as a township, rather than succumbing to the borough craze sweeping across Bergen County at the time. On May 3, 1921, and again on June 1, 1926, portions of what had been Teaneck were transferred to Overpeck Township.

Teaneck lies at the junction of Interstate 95 and the eastern terminus of Interstate 80. The township is bisected into north and south portions by Route 4 and east and west by the CSX Transportation River Subdivision. Commercial development is concentrated in four main shopping areas, on Cedar Lane, Teaneck Road, DeGraw Avenue, West Englewood Avenue and Queen Anne Road, more commonly known as “The Plaza”.

Teaneck’s location at the crossroads of river, road, train and other geographical features has made it a site of many momentous events across the centuries. After the American defeat at the Battle of Fort Washington, George Washington and the troops of the Continental Army retreated across New Jersey from the British Army, traveling through Teaneck and crossing the Hackensack River at New Bridge Landing, which has since been turned into a state park and historic site commemorating the events of 1776 and of early colonial life. In 1965, Teaneck voluntarily desegregated its public schools, after the Board of Education approved a plan to do so by a 7–2 vote on May 13, 1964. Teaneck has a diverse population, with large Jewish and African American communities, and growing numbers of Hispanic and Asian residents.

Complete the form below to learn more about Approved Funding, including our exclusive benefits for Friends of Teaneck.