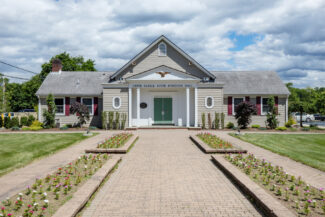 Originally a rural farming town, much of the history of Upper Saddle River has been preserved, adding to the borough’s charm. Sites such as Borough Hall, originally the one-room schoolhouse, the Cultural Center and the Hopper-Goetschius Museum are landmarks. The Upper Saddle River Historic Preservation Commission has registered many historic homes and sites in town and has installed commemorative plaques.

Upper Saddle River is known for its excellent school system for Kindergarten through 8th grade, and is a part of the Northern Highlands Regional High School, one of the most highly regarded high schools in the state. The Upper Saddle River Library, in addition to all types of information, provides state-of-the-art technology and a wide variety of programming for children and adults.

Archaeologists have found evidence that prehistoric cave-dwellers lived in the Saddle River Valley as far back as 7000 years ago. Later, Indian Tribes migrated here and, finding the area unpopulated (the cave-dwellers had long since disappeared), called themselves the Lenape, or original people.

In the 1600s, European settlers began to cross the Hudson from Manhattan Island and make their way up into our area. The first to put down roots in what is now Upper Saddle River was Isaiah Valleau who, in the early 1700s, took title to 300 acres where the schools and the Borough Hall are now. Others soon followed, carting their possessions up rough Indian trails along the river. They set about clearing the land for farms and building shelters of local materials, wood and stone.

There are a number of theories on the origin of the name Saddle River, but the most likely is that it came from two Scotsmen exploring the area in the 1600s who thought it resembled the Saddle Burn in their homeland.

George Washington marched his troops up the East Saddle River Road during the Revolution, and there are still a number of buildings in town that date from that era: the Hopper-Goetschius House (1730), which is now a museum; and three private residences: the Hopper-Taylor house on the corner of the West Road and Lake Street; the Hennion-Rudolph home on Pleasant Ave. and the Nicausie-Hopper house on Hopper Farm Road. Many other homes date from the early 1800s. The Old Stone Church, completed in 1819, replaced an earlier building built in 1787. The Van Riper-Tice Barn at the Hopper-Goetschius museum is a fine example of the New World Dutch Barns common in the area, and dates from 1800.

In addition to the farms there were a number of mills situated along the branches of the Saddle River. These were needed to grind grain into feed and flour and to saw wood. Three still exist as private homes: John Post’s mill on Hillside Avenue, another Post mill at 7 Old Stone Church Road, and the Bush mill off the West Saddle River Road. All were built about 1800.

In 1894 citizens of the area voted to incorporate as a Borough – there were 100 eligible voters in town and 50 of them cast ballots. The new Borough of Upper Saddle River had an assessed valuation of $129,400!

Upper Saddle River was primarily an agricultural community until after World War II, known for its apples and strawberries. The Borough remained small in population (under 500) until the 1950s when the zoning ordinance was passed. To imagine what the town was like back then you would have to take out 96% of the people and the houses! The farms have disappeared and the rural nature of Upper Saddle River has changed, but the homes, the trees, the landscaped yards, the schools and the river itself continue to make Upper Saddle River a unique and desirable place to live.

Complete the form below to learn more about Approved Funding, including our exclusive benefits for Friends of Upper Saddle River.