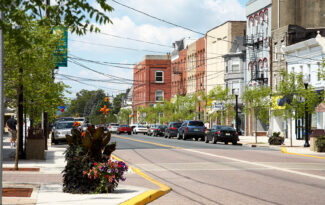 The Dutch were the first foreign settlers attracted to the Township of Washington. Prior to this, it is said that the Lenape Indians were the inhabitants. They were mostly gone by the early 1700’s. Only the names remained, such as: Pascack, Kinderkamack, Musquapsink, to name a few. The Dutch cultivated the apple trees and fields which the Indians started and pumpkins, spinach and grain grew in the valley. The area became known for its apple cider.
The Township of Washington, organized by 1840 by an act of the State Legislature, was one of the largest townships in Bergen County, separating from Harrington Township. It had an area of 19,525 acres (about 30 square miles) and it had a background of solid Dutch settlers reaching into the 19th century. John Ackerman was elected as its first official leader. An 1840 map shows about a half dozen houses in the area, made up of mostly farmers who settled along Pascack and Ridgewood Road.

Population and trade in the Township grew with the completion of the N.J. and N.Y. Railroad through the Pascack Valley in the decade following the Civil War. These changes heralded the idea for communities to have self-government. Between 1894 and 1909, the municipalities of Emerson, Westwood, Hillsdale, Woodcliff Lake, Rivervale, Park Ridge and Montvale applied to the state for charters allowing them to form new boroughs. The Township of Washington dwindled to a mere 3-1/4 square miles. By 1910, the Township had a population of 100. In 1920 – 194; 1930 – 402; 1940 – 491; 1950 – 1208; 1960 -6,623; 1970 – 10,577; 1980 – 9,550; 1990 – 9,200; and 2000 – closes in on 10,000.
We have a number of interesting places in our town, one of which is “Seven Chimneys” – a large 18th century stone house that stands high on a grassy knoll in the southern portion of the Township. Legend has it; George Washington stayed there a short period of time, which gives our community special history and pride.
The Township has carefully planned and zoned its town so it can withstand the absence of industry and be a fine residential community. The small patch of northeastern New Jersey, the Township of Washington calls home, is still a community where trees are plentiful, sidewalks are rare, crime is minimal and industry is not welcome.
On Pascack Rd. there is a shopping center anchored by a Fresh Grocer supermarket, banks, a movie complex and 24 specialty stores. This comprises the 5% of commercial development in the town. The Township of Washington is only 4 to 7 minutes from one of the finest hospitals in New Jersey, Valley in Ridgewood (currently buidling a new facility in Paramus).There are 5 condominium complexes and a luxury senior citizen condominium development.
The Township of Washington and Westwood share the Westwood Regional Public School. The Township of Washington Public Library with a variety of cultural programs for all ages is housed on Woodfield Road. There is an all girls’ parochial high school, Immaculate Heart Academy on Van Emburgh Ave. with churches and synagogues representing all religious denominations. There are eight private tennis courts, a swim club and the Bethany Church Community Center for competition and exercise.
The Township of Washington has an extraordinary recreation program for each season and for all ages – and takes great pride in their Senior Citizens Activity Center.
The Township of Washington is a tranquil town surrounded by a web of major highways including Rt. 17 and 4, which facilitate easy commuting to other parts of New Jersey. Accessibility to buses and trains alike for the daily commute to New York make this town a desirable place to relocate.
Many old-time families have grown up in the community and have established strong ties here; and today we are witnessing 2nd and 3rd generations moving back into the community.
The Township of Washington is an ever-growing community but even with all our 21st century improvements, we still feel strongly about preserving the residential character of the Township of Washington – Could that be why our children return – a little part of rural America is perhaps the legacy they are looking towards.

Complete the form below to learn more about Approved Funding, including our exclusive benefits for Friends of Washington.