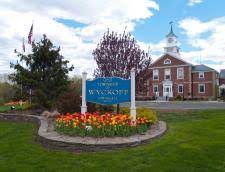 Since its first settlement in the early 18th Century and eventual incorporation in 1926, Wyckoff, New Jersey has developed into a lovely tree-lined residential community of approximately 16,000 residents. The Township of Wyckoff comprises seven square miles and is only 27 miles from New York City.

Located in Northwest Bergen County, midway between Saddle River and the Ramapo Valley, the Township of Wyckoff was originally inhabited by the Lenape Indians. In 1720, the first settlers were recorded as John and William Van Voor Haze. There is reason to believe that the name Wyckoff is a derivation of the Indian word “wickoff” meaning high ground or “wickok” meaning water.

The Township was the site of the Sicomac “happy hunting ground” where many of the Lenape, including Oratam, Chief of the Ackingshacys, were buried. The high ridge connecting the present Township with Hawthorne was the place where the Minsis of northern New Jersey met to barter with the Long Island Indians. The famous Minnisink Trail from the Delaware River to the Atlantic Ocean ran through the southwestern section, which has retained the old Indian name, Sicomac.

As part of East Jersey, the territory now comprising the Township was originally in the hands of Sir George Carteret, who along with Lord John Berkeley received a grant for all of New Jersey from the Duke of York in 1664. During this early settlement, the Wyckoff area was part of Saddle River Township, which included all the land in Bergen County west of Saddle River. In 1771, the municipalities of Wyckoff, Ridgewood, Ramsey, Ho-Ho-Kus, Franklin Lakes, Oakland and Midland Park was incorporated as Franklin Township. During the following 150 years, various sections of Franklin Township split off and incorporated.

In 1926, four years after the creation of Franklin Lakes Borough, the Chamber of Commerce initiated a name change from Franklin Township to Wyckoff. On November 2, 1926, voters approved the name Wyckoff with 243 positive votes out of 337.

In 2011, Ashley Garbaccio, developed The Wonders of Wyckoff, an historical coloring book of Wyckoff to earn the Girls Scouts of America Gold Award. The coloring book is for the children and residents of Wyckoff. Beneath the drawings are short facts pertaining to the illustration including its historical significance.

Complete the form below to learn more about Approved Funding, including our exclusive benefits for Friends of Wyckoff.