Is The Mortgage Refinancing Wave Officially Over?

The number of mortgage applications continued to drop last week for the fifth consecutive time. According to the Mortgage Bankers Association’s weekly market composite index, a measure of mortgage loan application volume, there were 1.2% fewer applications for home loans submitted last week than the week before. On a year-over-year basis, that equates to a 44% decline. 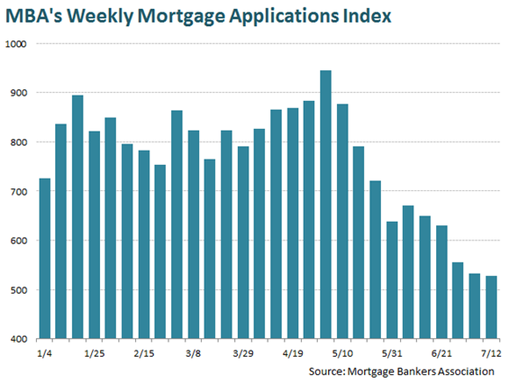 If you’ve been following the mortgage market over the last few months, this shouldn’t come as a particularly big surprise. Since the end of May, interest rates have soared, sending the demand for home loans concomitantly lower. Given their heightened sensitivity to rates, applications to refinance an existing home, as opposed to purchase a new one, have been particularly hard hit. As evidence of this, the MBA’s refinance index is at its lowest level since July of 2011. They’ve dropped by over 50% in the last two months alone, as the rate on a conventional 30-year fixed-rate mortgage went from below 3.5% to right around 4.5% today.

That said, at Approved Funding we continue to see strong demand for refinance mortgages particularly cash out mortgages, debt consolidations, and refinancing into a lower term (for example moving from a 30 year mortgage into a 15 year mortgage which are still closer to 3% in rate).