This article is not as much about losing a deal, as it is about understanding what was lost. Not getting every potential prospect as a customer is something that anyone in business is familiar with. As they say, ‘you win some, you lose some’. Professionally, I have experienced the thrills of instantly gaining long-term customers that I would have never imagined, as well as losing ‘slam-dunk’ clients that would have benefited immensely from my services. Working in this industry for as long as I have, you get used to people not working with you for all the right reasons, and wrong ones.

One thing I can never get used to however, is losing a client when I know they were misguided and mishandled elsewhere. I am not talking about bait-and-switches, and being tricked, that is 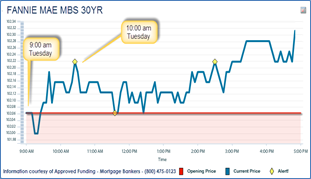 unacceptable and a poor comparison. I am talking about someone who is above board just going out there giving bad advice. Recently, I was talking to someone who was referred to me by a local real estate agent. It was 9am on a Tuesday morning, and he said that he submitted an offer on a house that was just accepted. He also told me in the interest of full disclosure, that he was also going to be checking with one other person before he made his decision. I can appreciate that, and always encourage prospects to do all the research necessary to make the most informed decision possible.

I was his first call, and we spoke in great detail as to the particulars of his situation. I offered my suggestions, advice and recommendations given his financial objectives. Of course, we discussed the applicable rates and fees, and I told him exactly how the different rate-lock options would work with Approved Funding. Before we hung up, I also told him that the bond market appears to be rallying, and I was hopeful that the terms and conditions we discussed would only improve if things progress as I anticipated based on the data being released. He was happy to have the information, and was pleased given the fact that he was extremely conservative and was working with a very narrow budget.

I followed up with him after 10am via email to let him know that as expected, the economic indicators came in worse than expected, and I anticipate an improvement in the figures we discussed earlier. I didn’t hear back from him, but was surprised as he told me that he has a full schedule, and that we would follow up later that evening or the following morning. My emails later that evening went unanswered, but again, I assumed he would be in touch very soon. The next morning, Wednesday, I followed up with a call and email to say that things are looking very favorable for mortgage bonds, and that I was excited to be able to formally offer him a much better offering than our initial discussions. Still no 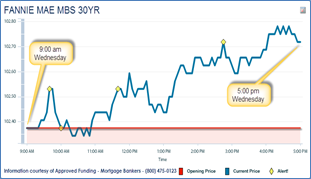 I finally got a returned call from him Thursday morning. I was ecstatic to be able to offer him a rate that was 3/8 % less than our initial discussions on Tuesday. Much to my dismay, he didn’t share the same enthusiasm as me, and for the first time I felt something was wrong. He told me that after our initial call on Tuesday, the other loan officer who he spoke with after me, offered him the exact same deal and threw in ‘a few dollars’ of a ‘closing cost credit’ to beat my offer, “if he was willing to lock-in the rate and move forward immediately”. His lock-in required a significant upfront deposit given the fact that the loan amount was $625,250. When he asked the loan officer about potential movement in rates with the economic news that was pending, the loan officer said he never gets involved in that, and only deals with ‘the information at hand’.

On a $625,250 mortgage, the 3/8 difference in rate would have saved my ‘almost’ client $48,088 over the life of the loan. It’s a significant amount, even if he doesn’t take the loan for the full 30 year term. In my opinion, one of the most valuable services that a mortgage lender can offer their client is guidance on all market-conditions, and how it might impact their mortgage. Prequalifying an applicant, and getting to closing on time is no longer a “service” factor – it is a given. Today, what separates one person from the other is having a full breadth and understanding of all the parameters of a given transaction, and factoring all the moving parts into the equation to offer the absolute best advice and guidance to a borrower. I know I offer that level of service to each and every ‘almost’ client, I just wish some people have the discipline to benefit from it.

Shmuel Shayowitz (NMLS#19871) is President and Chief Lending Officer at Approved Funding, a privately held local mortgage banker and direct lender. Approved Funding is a mortgage company offering competitive interest rates as well specialty niche programs on all types of Residential and Commercial properties. Shmuel has over 20 years of industry experience including licenses and certifications as certified mortgage underwriter, residential review appraiser, licensed real estate agent, and direct FHA specialized underwriter. He can be reached via email at Shmuel@approvedfunding.com.