New York NCSY recently hosted its annual community-wide basketball tournament in the Five Towns with more than 200 participants from the New York and New Jersey area. The winner of the 3-on-3 tournament was “Approved Funding,” with players Kenny Sicklick, David Jesselson and Jared Solomon. The winner of the 5-on-5 tournament was “Lightwave Energy,” with players Jared Stein, Shelby Rosenberg, Yisrael Feld, Yosef Rosenthal, Eitan Potash and Yehuda Guttman. 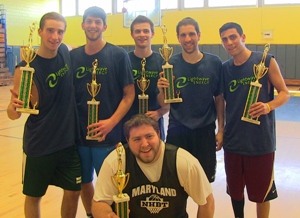 The goal of the tournament was to build awareness and gain community support forNCSY programming. Money raised from the tournament will go towards providing scholarships to study in Israel post-high school or attend an NCSY Summer Program.

According to Rabbi Aryeh Lightstone, regional director of New York NCSY, each year the level of competition improves; the enthusiasm is greater; and the community support has become stronger. “It has really been an honor working with our outstanding basketball committee and dedicated NCSY professional and lay staff in putting on the most popular Jewish basketball tournament,” he stated.

The games began at 9:00 a.m. and were held in various gyms around the community, including Hebrew Academy of the Five Towns & Rockaway (HAFTR), Stella K. Abraham High School for Girls (SKA), Davis Renov Stahler Yeshiva High School for Boys (DRS), Life Fitness and Lawrence High School. After a long and exciting day of 3-on-3 and 5-on-5 games, all participants gathered at Lawrence High School for a lunch catered by Shula’s Pizza and the final rounds of the tournament.

“There was a great crowd. The level of play on the court was amazing, probably the highest it has ever been,” said Kenny Sicklick, chairman of New York NCSY’s board and basketball tournament. “The best part is that the community helped to raise money that will be used to light a flame in many Jewish neshamot (souls). We thank everyone who was involved with this event.”

During the final rounds, children were treated to entertainment, including arts and crafts, a moon bounce and a baseball-slugging booth. Food was also available for purchase from David Kay of Prime Time Caterers. “The tournament was extremely successful, not only as an enjoyable Sunday event for the community, but more importantly, it helped raise much needed scholarship dollars for our precious Jewish teens,” reflected Carol Rhine, chief operating officer of New York NCSY.

To view pictures from the tournament, visit newyork.ncsy.org. For information about New York NCSY programs, call Carol Rhine at 516.569.6279