30-year fixed-rate mortgage (FRM) averaged 4.10 percent with an average 0.5 point for the week ending September 4, 2014, unchanged from last week. A year ago at this 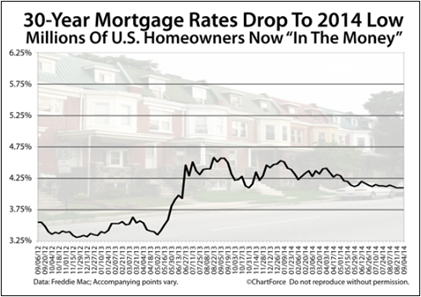 “Mortgage rates were little changed amid a week of light economic reports.  The 30-year fixed-rate mortgage rate remained unchanged from the previous week at 4.10 percent.  Of the few releases, the ISM’s manufacturing index rose to 59.0 in August from 57.1 the previous month.  This was the highest reading of the index since March 2011”, Frank Nothaft, vice president and chief economist, Freddie Mac

In housing news, research firm CoreLogic reported that home prices, including distressed sales, rose by 7.41 percent on an annual basis in July, marking the twenty-ninth consecutive month of year-over-year home price gains. However, prices are still nearly 12 percent below the peak set in April 2006.

And in news overseas, the debt crisis in Europe and continued uncertainty in other regions like the Middle East and Ukraine have helped Mortgage Bonds benefit from a safe haven trade. As a result, home loan rates, which are tied to Mortgage Bonds, remain near some of their best levels of the year.

The bottom line is that now is a great time to consider a home purchase or refinance. Let us know if I can answer any questions at all for you or your clients.