Rates Are On The Move!

In case you haven’t noticed, Interest Rates have gradually improved over the past few weeks, and are now at lows not seen in over a year.

Yesterday’s trading represented a very wide ranging chart, with lots of intra-day activity of highs and lows, as can be seen on chart#1 below. Bonds ending up closing near the lows of the day which led to a few reprice alerts for the worse.

The 10yr UST broke beneath 1.60% before pulling back, a level that hasn’t been reached in over a year, as can be seen on chart #2. Similarly, mortgage bonds (MBS) has been gradually improving since Mid-Dec, as can be seen in chart#3, and peaked to highs not seen in a year, before it too, pulled back and settled lower for the day.

We are very much in a similar trading pattern to that seen last year at this time before rates shot-up, as seen in chart#2.

This morning, there is continued weakness in bonds, and the sentiment seems that bonds are preparing for a reversal – and rates will begin to give back some of the gains we have seen over the past few weeks. With the weakness in housing which will pressure appraisal-values lower, there truly is no better time to pull the trigger on a rate lock for a refinance.

That said, with continued talk of recession, there is no way to determine with certainty if rates have bottomed yet. Fundamentally, without any significant change in the US economy, rates will be pressured higher. It can be said that regardless of talk from the Fed about not increasing rates so many times this year that mortgage rates are poised to increase. 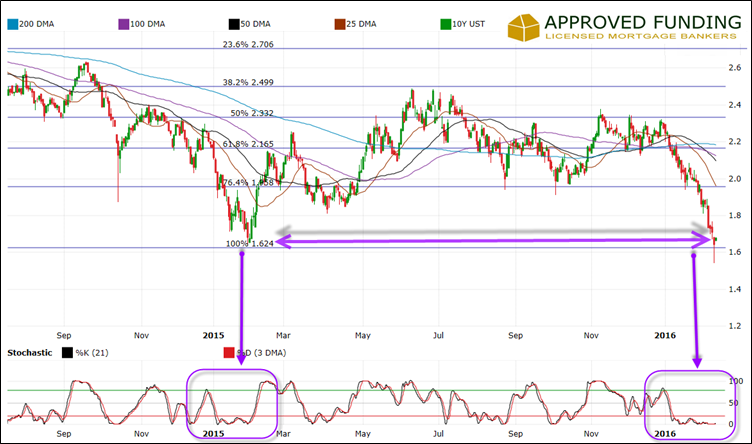