Home
Lessons From the Super Bowl Maximizing Your Money: What to Know When Buying a Home

Will They? Won’t They? How a Fed Rate Increase Might Affect Mortgage Rates 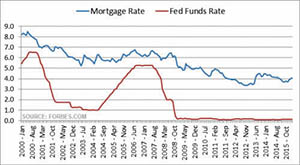 For months, the Federal Reserve has been signaling that it expects to start raising interest rates this year. They argue that with an improving labor market they can expect inflation to gradually rise toward their 2 percent target over time. The Fed started to cut short-term interest rates in October 2007 to support the fragile economy, and it continued to cut seven more times over the next 12 months. Should the Federal Reserve raise rates, it would be the first change to the current “near zero” interest rate policy which has been at this level since December 2008.

At its most recent October 28, 2015, Federal Open Market Committee (FOMC) meeting, the Fed surprised many market participants by abstaining from raising rates then and there. Global fears, specifically in China at the time, were causing concern and volatility which may have had a significant impact in the Fed’s indecisiveness at the time. Since then, on several occasions many members of the Federal Reserve, including Chairperson Janet Yellen, indicated that a December rate hike might be appropriate. The icing on the cake may have been the most recent jobs report on Friday, November 6, which well exceeded everyone’s estimates of just how well the employment market might be improving.

With that background and understanding, it might be time to consider how a fed rate increase might impact mortgage rates. Before we can determine the effect that a Federal Reserve rate change has on mortgage rates, however, it is important to know that the Federal Reserve does not control mortgage rates whatsoever. The Federal Reserve has the ability to control important instruments such as the “discount rate” and “fed funds rate,” which ultimately influence other market indices, but that is the extent of their ability.

The discount rate is the interest rate that banks pay when they borrow money directly from the Fed, usually on a short-term basis, to meet temporary shortages of liquidity caused by internal or external disruptions. The rate has been largely symbolic in the past and is typically at least one percent higher than fed funds rates. Because of this, hardly any banks utilized this source or method of obtaining funds except during emergencies.

The prime rate has generally been known as the interest rate that is charged to the most creditworthy bank consumers. These loans are typically extended to things such as credit cards and home equity lines of credit, as well as most small business loans. The prime rate is directly tied to the fed funds rate, normally three points higher than the published fed funds rate. In recent years, the prime rate has been offered to all types of consumers for various loan types and typically acts as a starting point (base) rate at which banks tie their loan rates to. These rates are generally variable and subject to change every month based on the published prime rate in effect at the time.

Now that we have a better idea of the different rates in the marketplace, we see that the only direct effect to a consumer is through the change in the prime rate. Should the Fed increase the targeted fed funds rate, consumers will be affected by receiving a higher rate on their prime-based loans as indicated above, beginning the following month after a rate increase.

Unfortunately, there is a very common and very wrong misconception that following a Fed rate cut, mortgage rates go down, and conversely, following a rate hike, mortgage rates will go up. After a fed rate cut, mortgage bonds often become less desirable, and typically more expensive. This is because bondholders now require a greater yield in return for their bond investment, thus driving mortgage rates higher. In 2007 and 2008, after every fed cut, we saw that bonds immediately sold off in reaction, and pushed rates slightly higher in the short-term.

With the development and growth of mortgages in the past few decades, a completely new method of mortgage lending emerged. Most mortgages are ultimately sold or traded in what is called a “secondary market.” Mortgages are amassed and bundled into pools that are finally securitized into bonds that are purchased by financial institutions, Wall Street companies, and the like. This environment is called the Residential Mortgage Backed Securities market (“MBS”). Mortgage rates are usually generated and priced by following the appetite for these MBS bonds in the market and the spreads that are demanding.

Most specifically, variable short-term loans that are tied to “prime” will be directly impacted by a Fed increase in rates. What might be most concerning is the market indication (predictions) of just how many times the Fed will raise rates in 2016 after a December increase. The likelihood is for a 25-basis point (¼ percent) increase in fed funds rate next month, which will lead to a corresponding increase in prime to 3.5 percent from its current 3.25 percent. From there, it’s anyone’s guess, but short-term prime rates might end up at between 4.50-5 percent before the end of 2016 if certain Federal Reserve board members get their way.

Homeowners and consumers should be using the time now to evaluate all of their outstanding loans and debts to see if consolidation is a viable option for them and how it would compare in a market with higher prime rates.